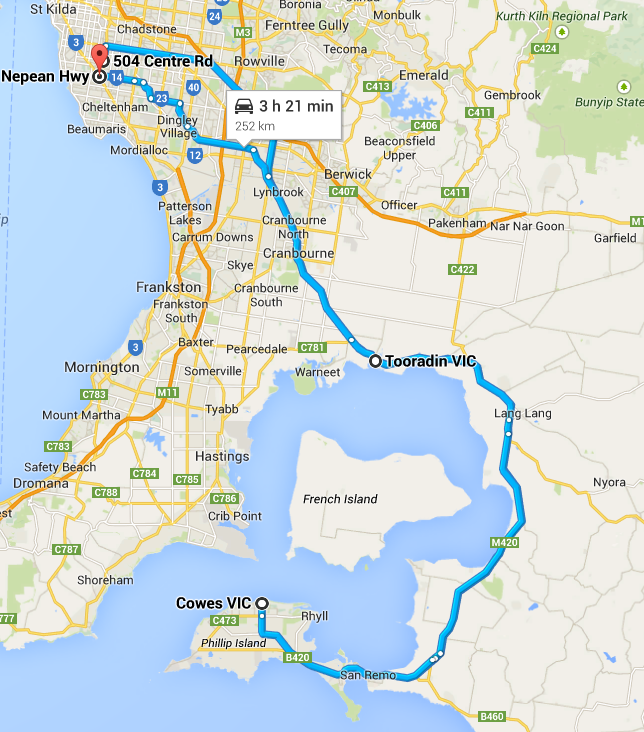 
The Moto GP day is always a fun ride with thousands of bikes heading down to Phillip Island. It's the one day of the year bikes rule the highways.

Our ride is simply that, a pleasure ride amongst the hordes of bikes heading to the track. Those who will head into the track can go for it. Those wishing to continue riding will be catered for.

Please note there is a departure time change. Have been asked by several riders to leave a little earlier so they make it home earlier. As a result we will leave at 8.30am


Great day for riding. The wind was a little strong but no rain and slightly overcast conditions made for comfortable riding conditions. Everyone arrived early at the coffee shop, thankyou all for doing that. Graham who was not riding with us today saw the group off

Riders were Glenn Wainrib who led the ride to the race track. Evan Rubinstein, back after a long license suspension. Richard (who did not come to the track but went exploring the Island). Avi Katz rode to the Island with the group but head back home from there to be with grandkids. Mark Barnoy, Wayne Levin, Stuart Conway, Volvi Goldberger, David Halperin and Carol.

Volvi, David and Carol left the group at Tooradin to return to Melbourne.

Glenn, Evan and Stuart walked off to Luckey heights to set up their arm chairs and watch for the day. Wayne Mark and I walked over to the final turn into the main straight to watch the Moto 3 race which Jack Miller our young Aussie won by less than 1/2 a metre from Marquez junior. That was a great race to watch. Miller used every bit of his skill on his KTM to get in front of the more powerful Honda of Marquez. Worth the strip just to see that race.

Wayne, Mark and I headed home just before the Moto 2 race and stopped at the chocolate factory as I needed a sugar fix for the ride home. When I hear from Glenn I will complete this report on their return home. The three of us had a very good ride home in very changeable hot/cold weather conditions highlighted by very strong winds.